This may be running multiple operating systems side by side or using a separate piece of software.

Alternatively, one operating system may run the other within program windows.

There are many benefits of using virtualization and it is becoming increasingly popular. Below, we have selected our top five picks of the best laptops for virtualization along with a handy buyer's guide, with all of our top picks for choosing the best product.

If you are in a hurry and don't have the time to continue reading, we have selected our top pick for you below.

In a hurry?
This is our Winner! 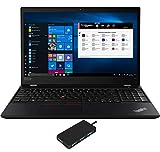 For our top pick, we have selected the Lenovo ThinkPad P53S, from a well-known brand this laptop is packed with all that is needed for virtualization.

This laptop has a 15.6" full HD display with a resolution of 1920 x 1080, which is going to work efficiently for virtualization, delivering crisp images and clear text. With dimensions of 14.4 X 9.95 X 0.78 inches, an inch of thickness and a weight of 4.3 pounds, this is a super user-friendly pick that is compact too.

In terms of the system specifications needed for virtualization, the P53s is powered by an 8th Generation Intel i7 8565U processor with 24 GB RAM and a high speed storage capacity of 512 GB PCle SSD.

Although graphics aren't as important when it comes to the effectiveness of virtualization, this laptop comes equipped with Quadro series of NVidia P520 2GB GDDR5 integrated graphics.

Regarding the additional features, this laptop has 1 x thunderbolt port, 1 type -C USB, micro SD reader, a 3.5mm combo jack and Windows 10 Pro-64 along with a 3-cell 57 Whr battery and impressively has a 1 year warranty too.

The Lenovo ThinkPad boasts a robust design with a professionally designed black aesthetic with fingerprint recognition too.

The Acer Predator Helios 300 is our next choice for you. With an Intel Core i7-9750H processor, this is considered to be the most powerful and high performing processor for virtualization, which is further supported by the turbo boost technology.

This Acer Predator Helios 300 is actually a gaming laptop hence why it is categorized as one of the best laptops for virtualization. With a 16GB RAM and 512GB PCIe SSD, this laptop is packed with all the storage capacity needed to perform well with fantastic speed.

Weighing almost 6 pounds this isn't a lightweight laptop. However, this heavyweight should be expected as this is a gaming laptop that has a robust and sturdy design, rather than a lightweight design for convenient portability.

The design makes it a great choice for professional or business use.

The Acer Helios enables a full range of ports so that you are always covered, this includes HDMI 2.0, USB Type-C, USB 3.1, the Mini DisplayPort supports up to 240Hz Refresh Rate and NVIDIA G-SYNC. Regardless of what creative tools you need to connect you have the port available.

This laptop also features a backlit laptop with Turbo and predator sense for a user-friendly experience.

Next up we have selected the LG Gram Laptop. Despite this laptop coming from a brand that isn't as known as some market dominators, this remains to be a sure win for those on the search for a laptop to support virtual machines.

Equipped with an Intel 10th Gen Core i7 1065G7 CPU processor with iris plus graphics, 16GB of RAM, and a 1TB of SSD capacity, you have all the required power to run a virtual system with ease.

With an 80WH Lithium battery, this laptop has an impressive battery life of around 17 hours, which means that you can use this laptop for a decent amount of time without it running low on power.

The LG Gram has a modern appearance along with a professional grade keyboard and responsive keys, giving you full command over your virtual machines, and a user-friendly experience. The backlit keyboard makes it much easier to type in limited light or when you're working late at night.

Incorporating Thunderbolt 3 you can charge, transfer, and display all at once through one connection. Whilst transferring data up to 40 Gbps, you can display a smooth 5K of video, and charge your laptop too.

The Lenovo Legion Y7000 Gaming Laptop is our next choice for you.

Coming an Intel Core i7-8750H Processor which works with turbo boost technology up to 4.1GHz, along with NVIDIA GeForce GTX 1060 Discrete Graphics and 16 GB DDR4 RAM with 1 TB HDD and 128GB PCIe SSD this device is packed with everything that is needed for virtualization.

This laptop has the power to perform well providing you with an efficient working experience.

This is a super portable laptop, at only 1.1 inches of thickness with a weight of 5.2 pounds, this combines epic gaming performance along with convenient portability so you can easily carry it around with you.

With a 15.6" screen and 300 nits of brightness, this brings the screen to life for the best user experience and crisp visuals.

Equipped with a full size responsive keyboard, the Lenovo Legion accounts for effective ergonomics along with a fast and comfortable typing experience. As a backlit keyboard it is also super convenient should you find yourself needing to work during low light situations or late at night.

This laptop is preloaded using a Windows 10 operating system and has a sleek and modern aluminum design.

For our final choice, we have selected the Acer Aspire 5. This laptop is a great choice for those who are working within a budget although it does come with an additional GPU.

Although this isn't as advanced as our previous picks this laptop is easy to upgrade and you can add additional RAM or SSD if you are hoping to run far more virtual machines.

With a 15.6" Full HD widescreen with a resolution of 1920 x 1080 pixels and an LED backlit IPS display, you will be accessing high quality visuals at an affordable price.

The Acer Bluelightshield also prevents your eyes from straining which is particularly useful is you are likely to be working for long sessions.

The Acer Aspire 5 supports a Windows 10 Home operating system and has a battery life of up to 9.5 hours. The backlit keyboard also makes it much easier to work in low lighting.

Weighing 5.84 pounds and measuring only 14.31 x 9.88 x 0.71 inches, this is a lightweight laptop that is convenient for transporting around.

There are many system requirements needed for virtualization to work effectively on your laptop.

Virtualization works by letting you create useful IT services using resources that would traditionally be bound to hardware. You can use a machine's full capacity by distributing its capabilities to many other users and environments.

We have listed some of these features below so that you are informed before making your purchase and likely to choose the best laptop for virtualization.

The processor is one of the most important functions of a laptop. You need a powerful processor that can handle all of the resources that are going to be used in the process of virtualization.

It is recommended that you choose a laptop with a multiple-core processor. We would recommend the intel I7 processor and any above this, as this processor is likely to work the most effectively.

Although each core may not necessarily be needed, it is going to be beneficial for virtualization to work the most effectively. Some low end processors may not be as compatible with this technology.

Another important feature is the RAM. Even if you have a strong multi-core processor, virtualization isn't going to work very well if you don't have enough storage space. Memory is needed for resource sharing in virtualization.

You need a minimum of 4GB of RAM for most systems, however, we would recommend a minimum of 16GB RAM. You will typically find the low end machines offer 16GB RAM, while workstation laptops or gaming laptops tend to offer 34GB of RAM.

If you are likely to be using a lot of virtualization systems we would recommend 34GB of RAM which is going to deliver a great performance, however, if this is not the case then 16GB of RAM should work just as well.

A dedicated type of graphics is not required for virtualization. The integrated onboard graphics that your laptop is equipped with should work well. The performance of virtual machines is going to be enhanced if your laptop configuration comes with NVidia or other graphic cards with video RAM.

We would recommend you investing more into the CPU or RAM, as these are the resources that your machine is going to be more reliant on rather than a particular type of graphics.

The internal storage capacity is also important to run multiple VM's. The minimum storage that is recommended for running VM software or other similar virtualization labs is 500GB.

The display of the laptop is going to be largely dependent upon your preferences and budget too. Although there is no specific display needed for virtual machines to run effectively, we would recommend a 15 inch display with 1920 X 1080 pixels for those on a budget, and a 17inch display for those wanting to spend a little more.

​The amount that you are willing to invest in your laptop is largely down to personal preference and the budget that you have in mind. However, it is important to select a laptop that boasts the system specifications for Virtualisation to work effectively.

Of course, there are still going to be good laptops that cater to those on a budget, but these maybe a little more basic in regards to what they offer when compared to those that are a little more expensive.

What are the benefits of virtualization?

Numerous benefits occur as a result of virtualization. These include but aren't limited to the following. Reduced capital and operating costs as virtualization are known to be a cheaper way of operating multiple systems yourself, minimized downtime, an increase in IT productivity with improved efficiency and responsiveness, a faster supply of applications and resources, and many more.

What are the different types of virtualization?

Is virtualization going to slow down my computer?

Virtualization can definitely help to speed up processing, however, this isn't going to suddenly impact the performance unless the correct architecture and tuning are in place. It is only then that you will begin to see an improvement in performance from virtualization.